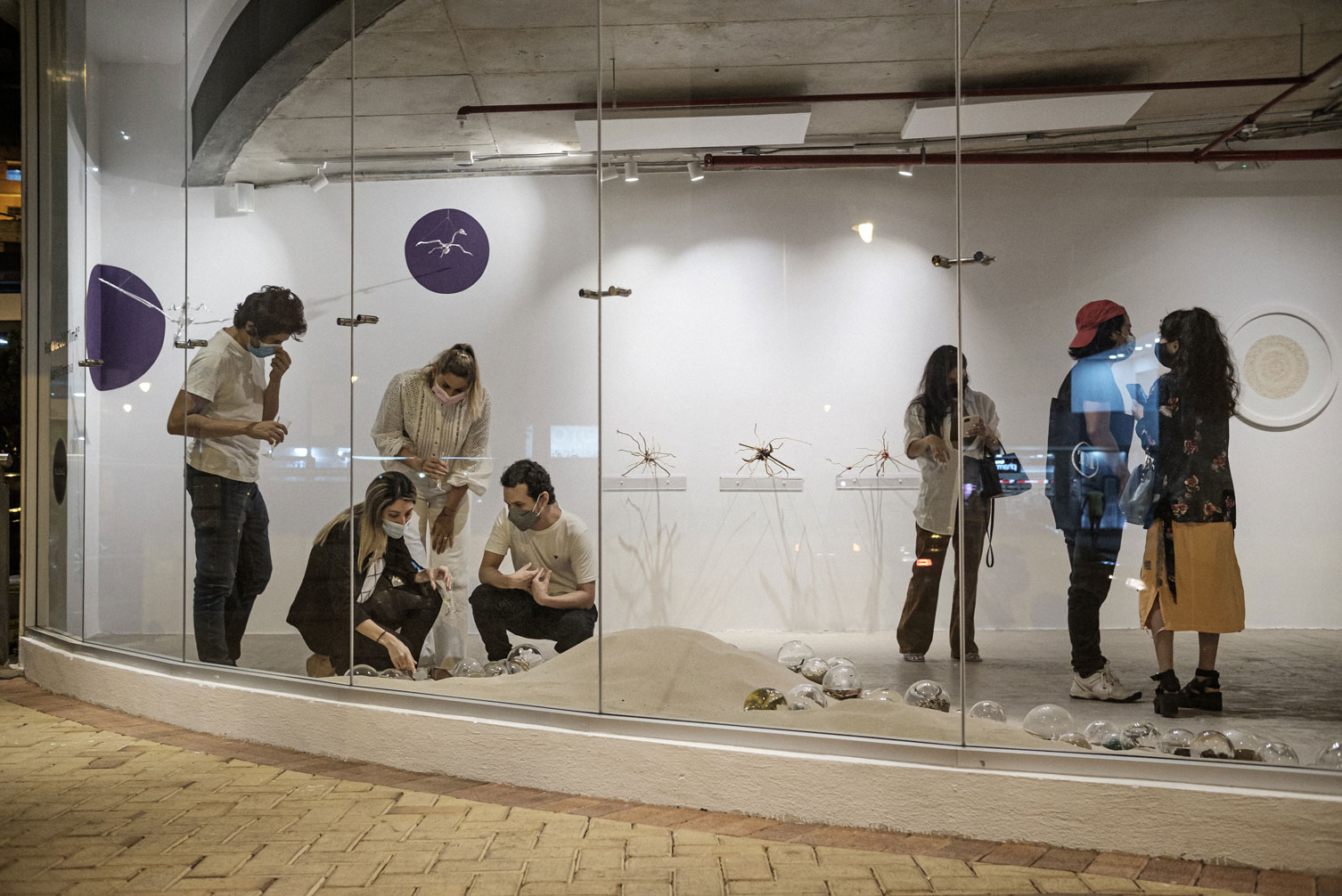 Ecuadorean artist, Juana Córdova, works with botanicals and site-specifically. Her exhibition at Artpace is no exception. Tumbleweed and achiote are her materials of choice in this exhibition, and can also be found in both the Texas landscape and TexMex cuisine.

Before coming to San Antonio, Córdova researched the history of tumbleweed, which originally comes from Russia and was brought to Texas in the 19th century via a shipment of seeds. They soon adapted, becoming almost native to the landscape (think about how ubiquitous tumbleweeds are in the Hollywood Western landscape.) Achiote, a spice and colorant, is native to the Americas. It’s a staple in Latin American cooking and was used by indigenous peoples before the arrival of the Spanish conquistadors.

In Córdova’s hands, tumbleweed and achiote are manipulated and transformed from the banal to a potent material with poetic properties and political ramifications. Her most polemic work in the exhibition is titled Captives. Tumbleweeds are suspended in clear tubes by an airflow strong enough to keep them at eyelevel, but not forceful enough to blow them out of their containers. Essentially, they are trapped. The impetus for this work is the immigration policies of the current US government. Asylum seekers, and those trying to enter the US, being detained at the border are literally being put in cages while they await trial or deportation. [1]Tumbleweeds, in contrast, don’t understand borders; they blow freely through the West Texas desert releasing seeds for new roots. This evocative metaphor is an example of her process. She gathers information about a specific location, studies and researches potential materials, and connects it to create socio-political content.

In previous works, Córdova has transformed found animal remains into sculptures that force the audience to behold the fragility and beauty of life through a critique of human indifference to the natural world. In Pleamar (High Tide), carefully cleaned skeleton bones of a whale she discovered on the shores of the beach near her home, speaks to the endangered status as a species. While in a more humorous work like Corriente Blanca (White Current), a set of headphones fabricated from shells encourages the audience to listen to the sounds of the ocean. [2]

Three times a year, three different artists converge in San Antonio. One from Texas, one from the U.S. and one from somewhere else in the world come to participate in Artpace’s residency program with one directive: create.

“Linda herself was an artist and a dreamer and a philanthropist and a collector. And so she founded Artpace as this laboratory of dreams, as she called it,” he said.

She created that laboratory of dreams to expose the city to international arts. While here, each set of artists actually lives in Artpace’s  on-site apartments. Houston artist Francis Almendariz says Artpace’s help was elemental in his exhibit.

“It was a huge, huge help to have all of these resources and a team that fully believes in you and backs you up in every way possible,” he said.

He felt an obligation to capture the image of people who history will otherwise forget.

“Immigrant bodies and people migrate around the world and offer up their bodies and their labor and search for a better life,” he said.

The video of the man making Nike knock-offs shows his incessant work, and how the Mexican music on the radio seems to push his endeavors along. Almendariz notes that Hispanic workers at construction sites the world over almost always have Mexican music playing.

“The radio playing kind of just kind of creates this atmosphere or to… it becomes almost meditative,” he said.

The next artist was here all the way from Ecuador. Juana Córdova makes much of her art from plants and found objects. Before coming to Artpace, she already had an idea about what she might make. While she understands English, she spoke mostly through a translator named Leticia Rocha-Živadinović.

The most eye-catching portion of Córdova’s exhibit features four clear tubes with fans at the bottom of each, blowing up a small tumbleweed, which tumbles over and over within the tube. Córdova explained the concept through the interpreter this way.

“The keeping of these tumbleweeds captive within these tubes I’m making a reference to the migrants that are being held captive at the border, and being prevented from continuing on their natural path,” Rocha-Zivadinovič said.

She said tumbleweeds blow across borders as if they don’t exist. As we spoke, the interpreter Leticia stopped and laughed uncomfortably, and put her head in her hands. She found it difficult to continue because she was crying. Córdova’s art about immigrant families separated and jailed at the border was a tough subject for the interpreter.

“This is something I have a very emotional response to,” she said.

The last artist had already returned to New York. Residency Manager Erin Murphy described what the artist, who calls herself Narcissister, is all about.

“The artist is a fictional character that the artist conceived of in 2007. She works primarily in performance she has done performances all over the world,” Murphy said.

Narcisster’s creations, like the other artists’ can be seen at Artpace through September 9. These waves of artists fly in every three months for eight weeks of creation.

After their stay, artists present their work, then head back home. The apartments are cleaned, then the next crop of three will come to create.

Linda Pace died in 2007, but Williams said her legacy continues to give rise to new artists, and expose San Antonio to them.

“Next year Artpace celebrates its 25th anniversary. We brought more than 230 artists and over 70 curators well-known in the field of art from all over the world to San Antonio to leave their mark and their impact here,” he said.

You can see the work of the summer flock of artists, and other exhibitions at Artpace, seven days a week, and always for free.

The latest round of Artpace’s International Artist-in-Residence program demands to be heard as much as seen. Each of the artists elected by guest curator Karina Aguilera Skvirsky has created visually distinct and seemingly disparate bodies of work, but the exhibitions are united by the presence of sound.

For “Chronicles of Uprooting,” Juana Córdova (Cuenca, Ecuador) collected samples of tumbleweed, an immigrant plant that made its way to the American West via a shipment of flaxseed from Russia, and achiote seeds, a plant common to the tropics of Latin America that has been used to give flavor and color to food, cosmetics and textiles since the Pre-Columbian era. The space is filled with a gentle droning, provided both by fans that keep three tumbleweeds spinning aloft in transparent tubes and a video installation featuring the frenetic movement of insects. From the winding roads of flattened tumbleweed unspooled on the wall to a diaspora of achiote seeds mounted in a corner, Córdova renders the journeys of immigrant peoples in miniature, metaphorically connecting the movement of flora to human migration worldwide.

Francis Almendárez (Houston) focuses on the rhythms of work both commercial and domestic in “rhythm and (p)leisure.” Shot in Honduras and El Salvador, the multi-screen video installation is abuzz with the myriad sounds of human tasks, whether it be a man hammering the soles of counterfeit Nike sneakers, a woman gently sweeping a tile floor or a group drumming on a street corner. From the rushed pace of the city to the more leisurely speed of the countryside, Almendárez has captured the processes of human work, both material and immaterial, and reveals how even activities we view as leisure are still “work” in their own right. Piles of clothes on pallets offer the viewer a place to sit or recline, but this is merely a brief respite before the garments reenter the global circulation of sale, resale and disposal.

Masked artist Narcissister (New York, New York) is a provocateur whose performance art has been seen in venues from burlesque clubs to America’s Got Talent. While functionally silent, the bombastic imagery of the erotic collages included in “Wimmin” are loud in their own way, unapologetically confronting the intersection of femininity, race and sexuality. However, the artist’s work also possesses an auditory component that arises when pieces are “activated” (a term she isn’t particularly fond of) in performance. During the free opening reception, performances will cycle every half hour, featuring small gestures such as the swishing of the fabric of a formal dress as it’s wrapped around a body encased in a bale of aluminum cans and the echoing clank of the pan-eyelids of an assembled face being opened by an anonymous performer, who completes the structure’s features with a large, pierced nose worn on her back.